British artist Marco Chiandetti talks to My Art Guides from his National Art School studio in Sydney about his work for the upcoming 20th Biennale of Sydney: “The future is already here — it’s just not evenly distributed.” Chiandetti, who works in a broad variety of media and disciplines, including sculpture, drawing, performance and installation, has created a work specifically for the ‘Embassy of Transition’, one of the Biennale’s six ‘embassy’ spaces and set in the one-time Sydney Mortuary Station, a neo-gothic train station purpose built for 19th-century funeral goers. Entitled “The boundaries which divide Life from Death are at best shadowy and vague. Who shall say where the one ends, and where the other begins?”, it consists of a series of aviaries housing live myna birds, recalling the Victorian penchant for housing exotic flora and fauna in highly sculptural, fantasy environments as well as honouring the site’s Victorian heritage and poignant purpose.

Donna Wheeler: Can you tell us a little about your process of developing your work? I was interested to hear that it’s truly site specific and was developed and made while visiting Australia. Is this a usual way of working for you?

Marco Chiandetti: It’s never been a conscious decision to work in this manner, but there have been several instances over the past few years that I have made work specific to the place I am in. The work comes out of a direct observation of the place, and I use the materials I find, or processes I discover, in that place. In this way there is a strong bond between the work and locality, however what I try to do is develop ideas that move beyond that place, to touch on something that is shared by us all. I am really not interested in art that talks about art, I’ve heard enough of these dialogues. What I am interested in though, is the human condition and those things we all experience. So I hope I have made a work that talks very much about this place, Australia, but also about us all. It’s not an easy thing. I wanted to create a work that had a strong spiritual element, but also a very subtle politically charged undertone. So I came to Australia and just observed.

DW: The use of the introduced mynah bird as a key part of the installation has proven controversial … Stephanie Rosenthal, this year’s director, mentioned that your choice was deliberate and to do with your concerns of displacement and identity. Has the public reaction shocked you?

MC: Stephanie knew I had been wanting to make a work using birds for a while and she invited me here with this in mind because, of course, Australia has such beautiful birdlife. I never thought though that I’d end up working with a pest species. In a way the work came together quite by chance, and through conversations and the knowledge that the Mortuary Station was a possible venue. It got me thinking about the possibility of using a bird as a symbol of the transition between life and death. In some cultures birds are thought to carry the souls of the dead from this world to the afterlife.

When I arrived in Australia, I was immediately attracted to the myna. They are very gregarious. It was only when I was looking at a book of the birds of Australia that I saw the common myna wasn’t there, then a friend told me that’s because they are not native and everyone hates them. This immediately got my attention. This all happened right at the moment when the political refugee situation exploded in the media, which raised some very interesting questions for me. Could I actually use this bird to talk about, in quite a subtle way, the issues around displacement, migration and immigration?

As you can imagine, some people had strong reactions to me using this specific bird – just mentioning the words ‘myna bird’ stirs up such a strong response … it’s extraordinary. Exhibiting a pest species hasn’t come without issues either! Who knows the reality of all this and if the myna bird is really that invasive: what we do know is that they live particularly well around human beings; we have created the perfect environment for them to flourish. So maybe we are the invasive species, not them. 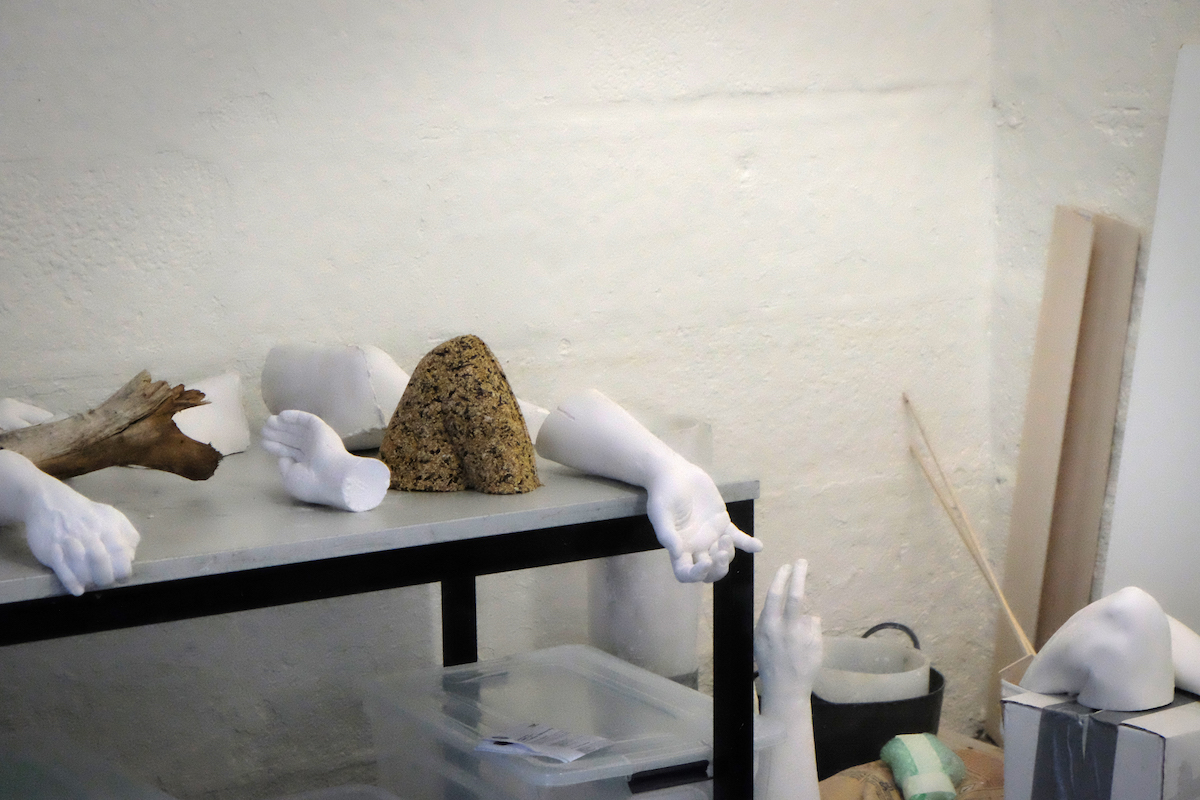 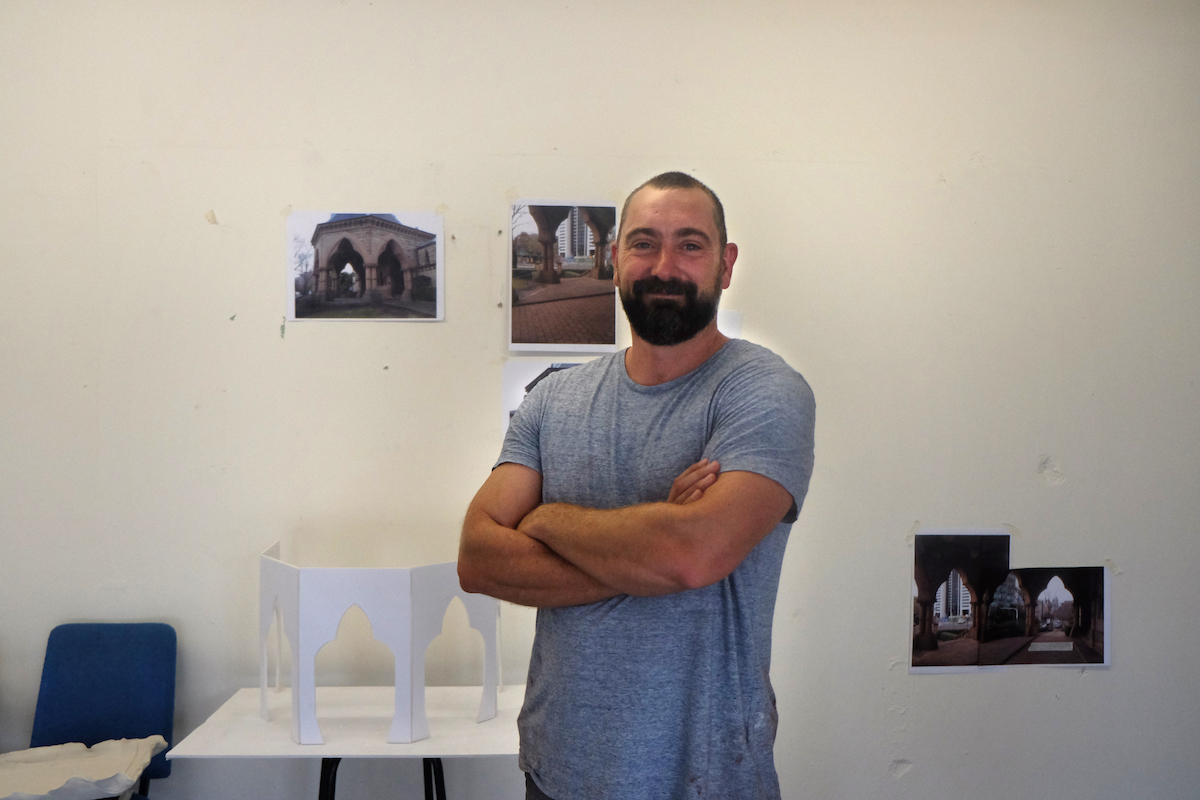 DW:  Do you think there’s more to it than just an ecological sensitivity that Australians have to introduced species?

MC: One ornithologist I spoke with felt that people’s reaction towards the species was related to an ingrained racism because the bird is not from here. Throughout this work there is a dialogue between native and non-native. All the timber, the grasses etc are natives, only the birds are not. Humans are having a huge impact on the environment; we have shifted the ecology greatly and we have to try to understand this and work with it. I guess all of this is mirrored in the way our society is rapidly changing. Stephanie’s premise ‘the future is already here – it’s just not evenly distributed’ is absolutely correct: things are not equal for everyone and people will shift location to get what other people have. We are about to enter a time where we will see swathes of people move, unprecedented mass migration as parts of the globe become unsustainable. So we absolutely have to be open to diversity.

DW: You seem to pursue a very physical, elementally sculptural, deeply sensual and sometimes quite classical way of working, for example casting and your use of clay etc. Is this correct?

MC: I do have a very classical way of working, and the language or materials I use can be considered in that way. I definitely feel that, as an artist, I think through making; I think through the materials. And I make everything myself. I am really a maker at the end of the day. It’s actually the only way I can do it. So I end up making a lot, really a lot, and then I cut it back and just use the elements that I think are really working together.  What you end up seeing is a fraction of the output from the studio. This has been an interesting project as I am really using a wide range of techniques and materials and yet still trying to keep the work light. But you know, it’s all just a big experiment at the end of the day. I mean, we are trying to get birds to eat the sculptures…we have done tests, but maybe at the time of the show the birds just aren’t into it.  Who knows?

DW: What’s interesting is that you also work in a highly conceptual manner, with, as you say, a politically charged undertone, and then there are tilts towards the mystical or spiritual…

MC: This project has been particularly interesting because I really wanted to connect with the philosophy I grew up with, call it religious, or spiritual or even mystical, as you say. It such a strange, untenable territory, so I wanted to explore it. I guess I am coming from a Christian philosophy in relation to talking about death. Interestingly, I am exhibiting with the artist Charwei Tsai, who approaches the subject from a Buddhist tradition and philosophy, and in conversation with her there have been so many interesting parallels and overlaps. From a very personal perspective I am interested in the idea of the body returning to nature; that when we die, we are laid into the ground and our bodies disperse back into the environment. We are all made up of the same substances as the natural world around us. In the work I wanted to emphasise the cycle of life. The sculptures are casts of parts of the body in seed. The seed either falls to the ground or passes through the bird and germinates in the natural substrata of the aviary floor. From the ground springs new life. The seed in sculptural form is the potential of new life.

This site uses Akismet to reduce spam. Learn how your comment data is processed.