Yes, Chamonix, Verbier and St Anton will give you varied terrain, cracking après-ski and classic Alpine vistas. But there comes a time in every skier’s life when it all begins to feel a little homogenous. These seven European and Scandinavian resorts do things a little differently. Some are wildly remote, others are tucked away but still within easy striking distance of regular air or rail hubs. Either way, they all offer unforgettable off-the-beaten-piste winter sports adventures. 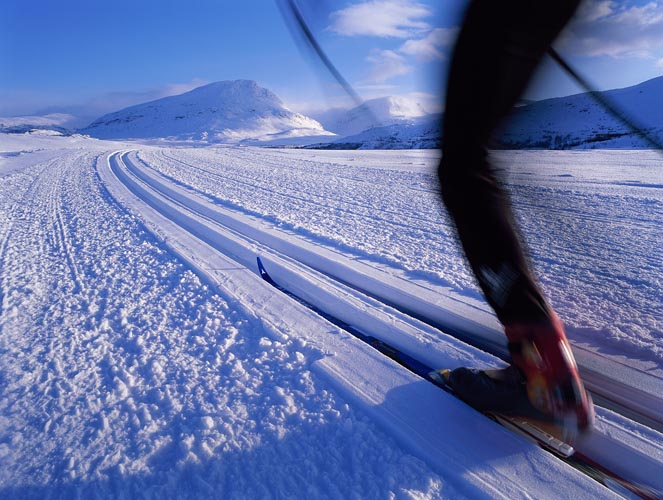 Ski at the top of the world in Arctic Sweden. Image by Johner / Getty Images

At 200km above the Arctic Circle, Riksgränsen’s season runs late, kicking off in February and lasting until late May or June. Compact but popular, this little resort retains a frontier feel befitting its far northern location – who wouldn’t want to try its late winter powder or take on rolling pistes under the midnight sun come May? Six lifts and 28 runs, half of them black, are nothing compared to its vast, cliffy back-country; heliskiing here is surprisingly affordable and from May can be done at night, setting you loose in an otherworldly landscape of pastel-tinged hills.

Getting there: fly from Stockholm to Kiruna, it’s a 90-minute transfer from there. But nothing beats the 15-hour northbound train, which delivers you directly into town, and a quick stroll to Hotell Riksgränsen and Meteorologen, its best accommodation and social hub (seeen.riksgransen.se). The Arctic Explorer line also runs from Narvik, just across the border in Norway, and flying there from Oslo can be cheaper. 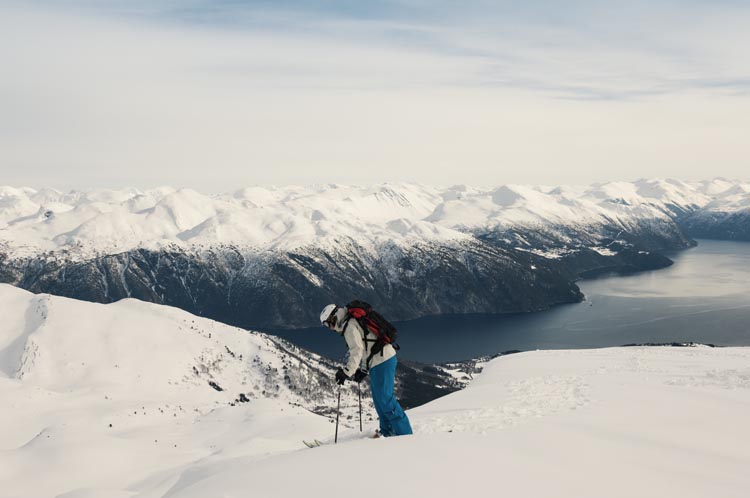 Get way off the beaten piste in Norway, to enjoy fjord views with your downhill skiing. Image by Christian Aslund / Getty Images

The best way to guarantee no lift queues? Ski up, ski down, Norwegian style. Romsdalen, in the northeast of the fjords district, is one of Europe’s best ski touring areas, known for its unfailing and enduring snow, long verts and spectacular views. While this is adrenalin junkie territory, snow guides will cater for a variety of skill levels with short trips or long climbs, easy or technical summits, a cruise down the easy terrain or ultra steep skiing. Kirketaket (1439m) has over 1000m of downhill, while Blånebba (1320m) has continuous views of Trollveggen and the Romsdalen fjords. Gateway town Åndalsnes is sports-mad and friendly, with several excellent year-round campgrounds, a hostel and beautiful boutique hotel, Hotel Aak. The Aak crew organises ski tours, as well as ice climbing, fishing and other winter sports.

Getting there: fly to Molde or Ålesund, but taking the train from Oslo orTrondheim to Dombås then onto the scenic Raumabanen Railway to Åndalsnes will add another level of winter wonderful to your trip.

Villages in the Auvergne, like Chastreix, are a perfect base to ski or snowboard a lesser-explored part of the French Alps. Image by Bernard Jaubert / Getty Images

The Parc Naturel Régional des Volcans d’Auvergne harbours some delightfully stress-free ski slopes, set against a backdrop of wild peaks, glacial craters and rural valleys. Le Mont-Dore, a once-glamorous Belle Époque spa town, is watched over by the 1886m Puy de Sancy. Its gently faded hotels and contemporary B&Bs come at price-points unheard of in the French Alps. The slopes are around five minutes via free shuttle from the centre, and combined with the modern resort of Super-Besse they offer 85km of trails, some excellent off-piste options, as well as cross-country, snowshoeing, skijoring and dog sledding. It’s also worth noting that the Auvergne produces what might be some of the country’s best cheeses, including Salers, Cantal and St Nectaire. The cheesemaker’s alpine workshops, or burons, have their own mapped trail (but check ahead, as some close for winter).

Week’s lift pass: €186 (US$233); six-day pass €155 (US$194)
Getting there: trains run to Le Mont-Dore from Paris Gare du Nord viaClermont-Ferrand. There’s an airport at Clermont-Ferrand serviced by Air France or another three hours away at Rodez that’s serviced by budget carriers. 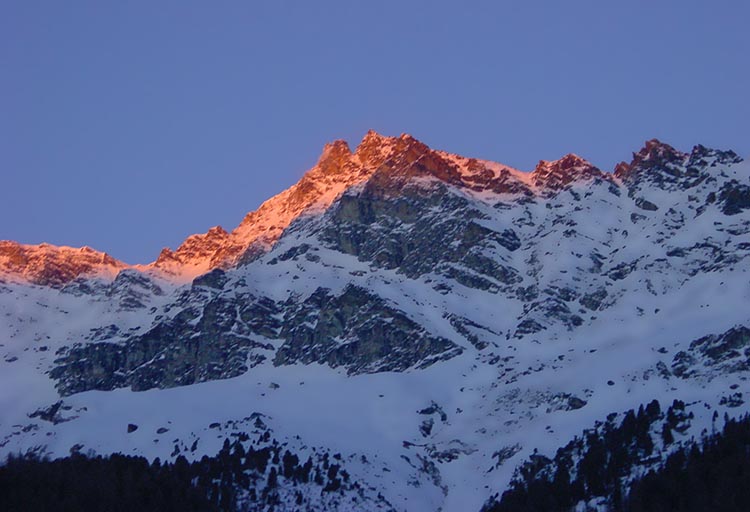 Kiss of sunset in the Swiss Alps, a playground for high-altitude adventures. Image by Allie Caulfield / CC BY 2.0

Vals slumbered in its remote Graubünden side valley until 15 years ago, with the opening of the spectacular Therme Vals (therme-vals.ch/en) after its designer, local Peter Zumthor, became something of a rock star architect. If ski-in accommodation is not your be-all, Vals’ traditional streetscapes of quartzite-roofed houses make for a particularly character-filled place to stay, either at the Therme’s own hotel or the equally stylish Bruecker 49 (brucke49.ch). A central gondola deposits skiers at the high-altitude resort of Vals3000/Dachberg. Its charms (and snow guarantee) may make it popular with weekend visitors fromZürich, but queues are rare and its 25km of slopes and good backcountry terrain remain as serene as they are spectacular.

Getting there: Rhaetian Railways and SBB run to Chur, from there the Vals-Illanz post bus takes you along the valley. 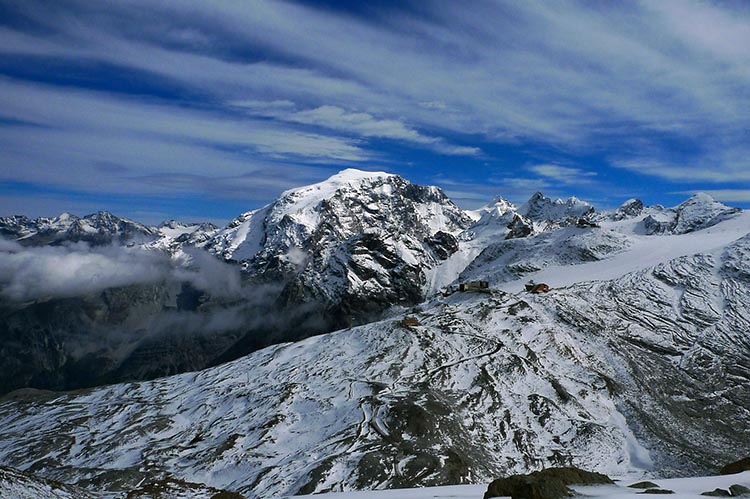 Europe’s Central Eastern Ortler Alps have giddying views, whether you’re on the Italian or Swiss side. Image by Hagbard_ / CC BY 2.0

Südtirol (Alto-Adige), Italy’s German-speaking alpine enclave, has a staggering number of ski resorts catering for everyone from pro-skiers to those that never quite make it beyond their chic, rustic hotel’s Michelin-starred restaurant. Nestled up a deep, densely wooded side valley, the village of Solda (1900m) is dwarfed by the Ortler peaks, some 2000m further above. These are slopes that drew some of Alpinism’s most revered pioneers and it remains one of Italy’s most pristine. Snow-sure from November to May, it has 41km of ski slopes and a good snowboard park, serviced by a number of comfortable, cosy hotels. Legendary mountaineer Reinhold Messner gives it his stamp of approval: it’s home to his snow and ice themed museum, along with his restaurant, Yak & Yeti.

Getting there: closest airports are Verona or Innsbruck, then Venice andTreviso; bus transfers are either direct or via Bolzano. 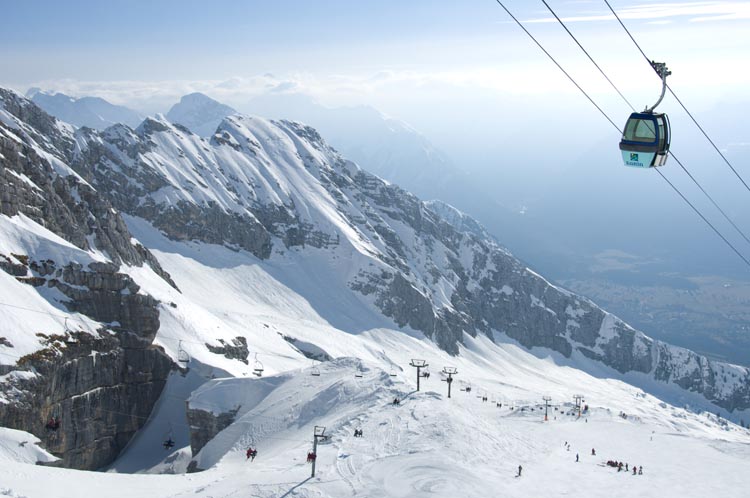 Tracing a line along Italy’s far northeastern border, the Julian Alps are brooding and icily cold: there’s often deep snow from November until early June (a micro-climate quirk rather than lofty elevation). Passes for Sella Nevea allow you to ski cross-border, over to Kanin on the Slovenian side of the mountain or head into Austria via nearby Tarvisio. There are 10 interesting runs for beginners and intermediates and although only one black, there’s a lot of very steep off-piste  terrain, plus the option to explore the Montasio plateau on snowshoes or dog sled. First timers come here for straight up alpine action, but return for the Friulian hospitality, including its earthy, bountiful dining and brilliant white wines.

Week’s lift pass: €196 (US$156), with significant discounts in early December and from mid-January.

Getting there: nearest airports are Trieste or Venice, with a one or two to three hour bus transfer respectively. Flying into Ljubljana is also an option if you hire a car. 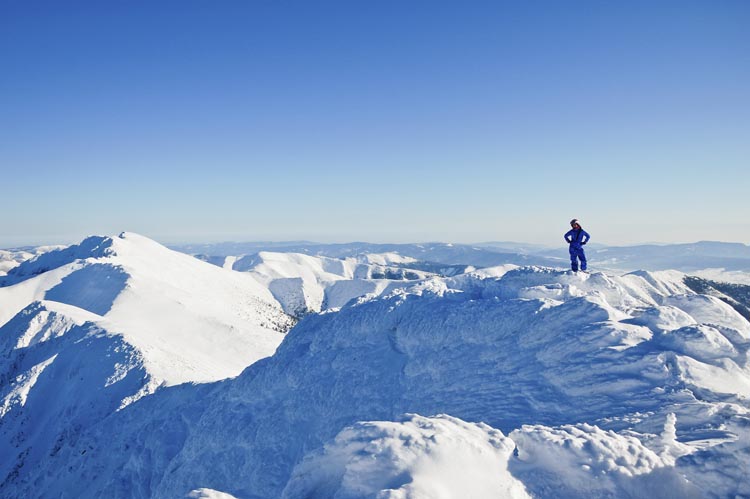 The pillowy snow of Slovakia’s Chopok Mountains are packed with uncrowded winter sports terrain – and passes are cheap. Image by itchySan / Getty Images

Slovakia’s Low Tatras’ ski resort sits on either side of the not-so-low jagged peaks of the Chopok Mountains. With a rapidly developing, well-looked after snowpark, five official off-piste zones, cheap food and ridiculously cheap beer, it attracts a go-hard, adventurous crowd. The addition of a lift in 2013 has made both sides of the mountain accessible (including those off-piste areas), so there’s 40km of beginners, intermediate, black and freeride pistes and some 1000m of vert. Well over half that 40km is fast, protected and tree-lined: in a word, atmospheric.

Getting there: nearest airports are Poprad, Žilina, Bratislava or Kraków, with bus connections from there taking 45-60min.